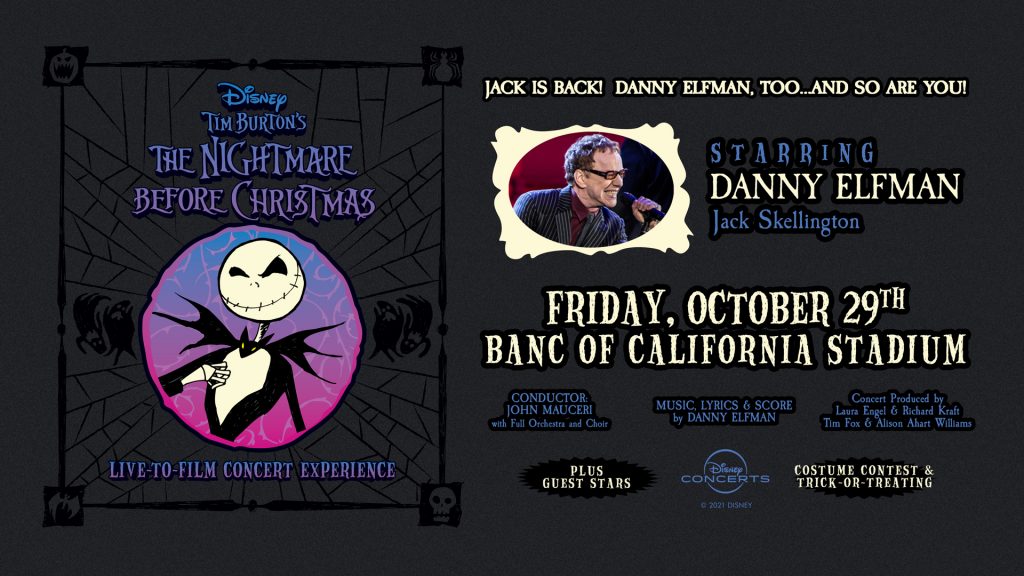 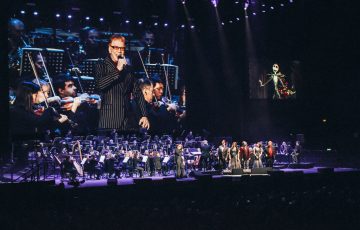 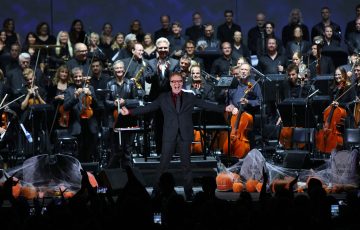 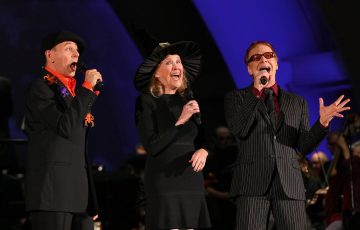 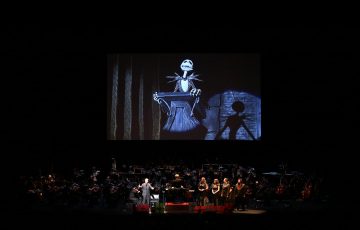 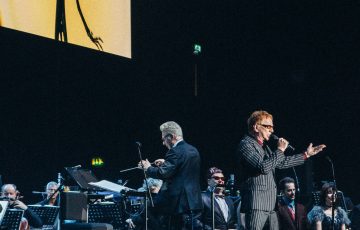 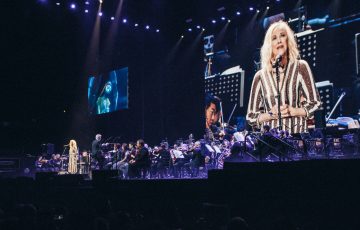 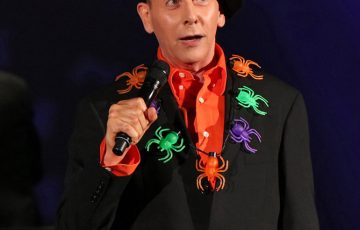 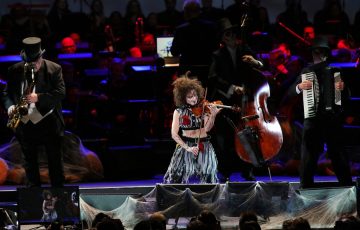 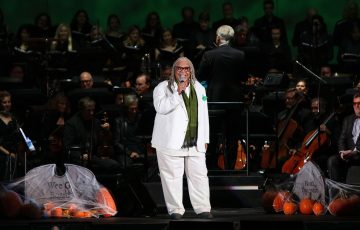 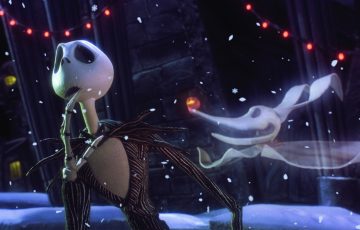 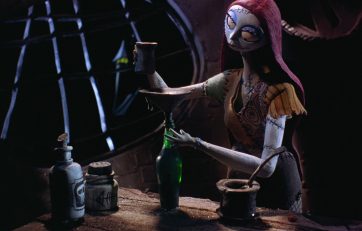 Jack is Back! After spending 2020 in quarantine with the rest of the world, esteemed, award-winning composer and Los Angeles’ reigning Pumpkin King Danny Elfman is returning to the stage with the live-to-film concert experience on Friday, October 29 at the Banc of California Stadium in Los Angeles, CA.

The Nightmare Before Christmas stands out as a seminal creative triumph from the legendary film making duo of director Tim Burton and composer Danny Elfman. Since its release over 25 years ago, this beloved family film has become a world-wide classic. This unique live cine-concert production features Danny Elfman, the original singing voice of the film’s main character, Jack Skellington, performing live in sync with the full-length movie projected on the big screen above a full symphony orchestra, choir, and additional members of the original cast. The production has performed to sold out audiences across the globe, including The Hollywood Bowl, Wembley Arena, Barclays Center, Tokyo International Forum, and Dublin's 3Arena.

Tim Burton, widely regarded as one of the cinema’s most imaginative filmmakers, has enjoyed great success in both the live-action and animation arenas. Most recently Burton directed “Big Eyes” and the critically acclaimed “Frankenweenie” which was a 2012 Academy Award® nominee for Best Animated Picture.

In 2010, he directed “Alice in Wonderland,” an epic fantasy based on the classic story by Lewis Carroll, and starring Johnny Depp, Helena Bonham Carter, Anne Hathaway, and Mia Wasikowska in the title role. The film earned more than a billion dollars at the worldwide box office, making it the second-highest-grossing release of 2010. “Alice in Wonderland” also received a Golden Globe nomination for Best Picture – Musical or Comedy, and won two Academy Awards®, for Best Art Direction and Best Costume Design.

Burton was previously honored with an Academy Award® nomination for Best Animated Feature for the 2005 stop-motion film “Corpse Bride,” which he directed and produced. He earlier received BAFTA Award and Critics’ Choice Award nominations for Best Director for the acclaimed fantasy drama “Big Fish.” More recently, Burton won a National Board of Review Award and garnered Golden Globe and Critics’ Choice Award nominations for his directing work on “Sweeney Todd: The Demon Barber of Fleet Street,” which also won the Golden Globe for Best Film – Musical or Comedy. Depp earned an Oscar® nomination for his performance in the title role of Burton’s 2007 film adaptation of the Stephen Sondheim musical thriller, also starring Bonham Carter and Alan Rickman.

Burton began his film career in animation, and, in 1982, directed the stop-motion animated short “Vincent,” narrated by Vincent Price, which was an award winner on the film festival circuit. He made his feature film directorial debut in 1985 with the hit comedy “Pee-Wee’s Big Adventure.”

In 1988, Burton helmed the inventive comedy hit “Beetlejuice,” starring Michael Keaton as the title character. He then reteamed with Keaton on the action blockbusters “Batman,” which became the top-grossing film of 1989 and also starred Jack Nicholson as the Joker, and “Batman Returns,” also starring Michelle Pfeiffer and Danny DeVito.

A native of Los Angeles, Elfman grew up loving film music. He travelled the world as a young man, absorbing its musical diversity. He helped found the band Oingo Boingo, and came to the attention of a young Tim Burton, who asked him to write the score for Pee-wee’s Big Adventure. 34 years later, the two have forged one of the most fruitful composer-director collaborations in film history. In addition to his film work, Elfman wrote the iconic theme music for the television series The Simpsons and Desperate Housewives.

Elfman has expanded his writing to composing orchestral concert works which include: Serenada Schizophrana, a symphony commissioned by the American Composer’s Orchestra, which premiered at Carnegie Hall in 2005, Rabbit and Rogue, for the American Ballet Theater choreographed by Twyla Tharp, performed at The Metropolitan Opera house in 2008, and IRIS for Cirque du Soleil directed by French choreographer Philippe Decouflé. In 2011, Danny Elfman’s Music from the Films of Tim Burton live orchestral concert, premiered at Royal Albert Hall, and has since toured around the world and won two Emmys®.

“I need to push myself into new territory with fresh challenges as much as I can and whenever I can. I am told I have a recognizable style but my greatest pleasure is when I can surprise the audience with my music.” – Elfman

Jack is Back! Nightmare Before Christmas Live Returns to LA!

“The crowd went wild for the cast as they stepped out on stage to perform their numbers live, individually or as an ensemble, elevating the festive and celebratory vibe...inside an immersive experience …which enabled the show to transcend any previous form and become something that left the audience in rapture and awe.” - Forbes
“Danny Elfman wowed the crowd with his vocal acrobatics…” - Billboard
“In 2015, Nightmare Before Christmas at the Hollywood Bowl was named the "#1 Concert of the Year"” - OC Register
“[Nightmare Before Christmas is] a revolutionary application of stop-motion animation, a labor-intensive process that involves the frame-by-frame manipulation of three-dimensional creatures.” - LA Times