"I often ask myself why this project seems so vital to complete now; what relevance does re-exploring Bach’s music have in today’s world and for a modern audience. I'm inspired by the opportunity to remove the barriers caused by labels and listening habits. Popular trends in music do not dictate quality, and conversely traditional patterns should not dictate accessibility. When Bach composed the Well-Tempered Clavier some 300 years ago his music was no longer fashionable. Counterpoint was replaced by the light stirrings of the classical style. Bach knew the importance of his work and remained undeterred. Thank goodness, as it has influenced all of western music since, from Mozart to contemporary Jazz. I can think of no better way for me as a composer to fight against the Anti-Intellectualism climate, than to pay homage to this master. Bach’s music contains the musical seeds of the human condition. He transcends pain and suffering and oppression by offering freedom of thought.

Many people are unaware of Bach because he has been stuffed into a rigidly labeled box which one is not supposed to open without proper training. The purpose of this project is to take Bach out of this box and reveal sides to him that have remained obscured from public view. To clearly show his relevance and the variety of emotional content that he endured and transcribed and which has resonated sympathetically with me. I have interpreted Bach’s map with my own emotional compass." - Marco Beltrami, composer

The composer established an early reputation as a genre innovator with his non-traditional horror scores for the Scream franchise. Beltrami’s musical palette has since expanded to virtually all film genres. Beltrami has received accolades for his music including two Academy Award nominations for Best Score: 3:10 to Yuma, starring Russell Crowe and Christian Bale, and for Best Picture winner The Hurt Locker, starring Jeremy Renner, co-scored with frequent collaborator Buck Sanders. In 2011 Beltrami won a Golden Satellite Award (Best Film Score of the Year) for Soul Surfer. Beltrami scored the Marvel film Logan, directed by James Mangold, and Angelina Jolie’s directorial debut, First They Killed My Father. He also wrote the theme for the hit video game Fortnite. Beltrami scored the critically acclaimed box-office hit A Quiet Place, which was nominated for a Golden Globe for Best Score and shortlisted for Best Score for the Oscars. Beltrami won an Emmy for National Geographic’s 2019 Oscar winning documentary Free Solo, (with co-composer Brandon Roberts) for Outstanding Music Composition for a Documentary, Series or Special.

He has lent his voice to such unique hit films as Live Free or Die Hard, Terminator 3: Rise of the Machines, and I, Robot. His other scores include The Homesman directed by Tommy Lee Jones, the zombie comedy Warm Bodies directed by Jonathan Levine, the final installment of the Bruce Willis action series A Good Day To Die Hard, Snowpiercer starring Chris Evans and directed by Bong Joon-ho, the Brad Pitt action thriller World War Z, James Mangold’s The Wolverine, and The Night Before also directed by Jonathan Levine, starring Seth Rogan and Joseph Gordon Levitt.

Upon completing his undergraduate studies at Brown University, Beltrami entered the Yale School of Music on a scholarship. His pursuit of music composition then led him to Venice, Italy for a period of study with the Italian master Luigi Nono, and then to Los Angeles for a fellowship with Academy Award-winning composer Jerry Goldsmith.

Declared “brilliant” by The Washington Post, violinist Sandy Cameron is one of the most strikingly unique artists of her generation. Since her debut at the age of 12 in Eindhoven, the Netherlands, Ms. Cameron has performed extensively as a soloist throughout the world. Here are some personal highlights of Sandy’s work:

On Stage: The most noteworthy, and a truly rewarding experience of Ms. Cameron’s career as a concert soloist is Danny Elfman’s Violin Concerto, “Eleven Eleven”. Mr. Elfman wrote this concerto for Ms. Cameron, and she had the great pleasure and honor of presenting the world premiere with conductor John Mauceri at the Prague Proms in June 2017. It was received with great success, and Ms. Cameron continues to enjoy performing the piece for audiences worldwide. Other special stage appearances include performances for Cirque du Soleil, Tan Dun’s Martial Arts Trilogy, and Danny Elfman’s Music from the Films of Tim Burton. Ms. Cameron is also featured in performances with renowned jazz trumpeter-composer Chris Botti, with whom she has toured globally. Additionally, Ms. Cameron has written and performed her own musical arrangements for several productions at the Hollywood Bowl, including Disney’s The Nightmare Before Christmas Live in Concert, Disney’s The Little Mermaid Live in Concert, Willy Wonka and the Chocolate Factory Live in Concert, and Disney’s Beauty and the Beast Live in Concert. Currently, Ms. Cameron is partnered with the illustrious composer, Marco Beltrami, in an exciting new project: Bach by Beltrami.

In the Studio: Versatile in her abilities as an artist, Ms. Cameron also enjoys musical engagements off the stage. In 2018, she recorded the Elfman Violin Concerto with Maestro Mauceri and the Royal Scottish National Orchestra, now available on Sony Classical. She is currently involved in an exciting new project with the illustrious composer, Marco Beltrami. Recently, she was featured as a soloist on John Powell’s score to The Call of the Wild and Bear McCreary’s score for The Professor and The Madman. Ms. Cameron can also be heard on soundtracks to Cirque Du Soleil’s IRIS, the video games Call of Duty: Vanguard and Assassin’s Creed: Syndicate, the History Channel’s Houdini, and more.

The outstanding violin used by Ms. Cameron, crafted by Pietro Guarnerius of Venice, c. 1735, is on extended loan through the generous efforts of the Stradivari Society® of Chicago.

“Central to this suite was a demonic, Paganini-inspired violin solo, played with steamy virtuosity by Sandy Cameron. This episode, a shameless showstopper…” - The New York Times 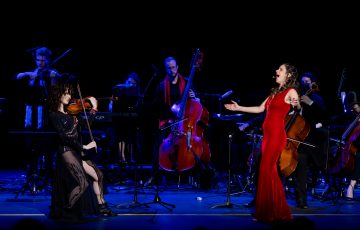 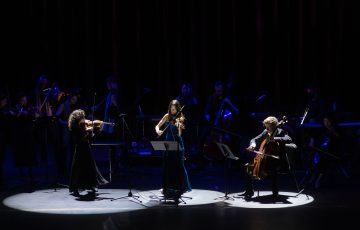 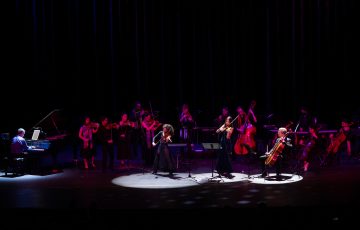 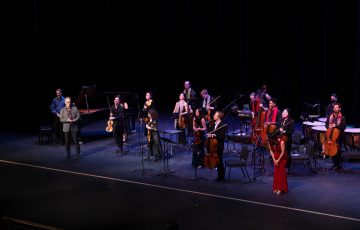 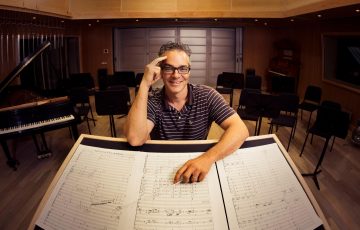 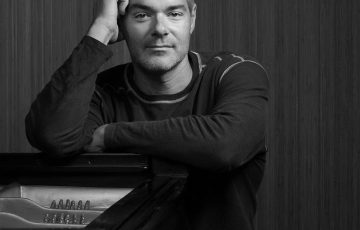 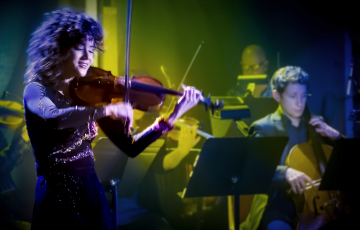 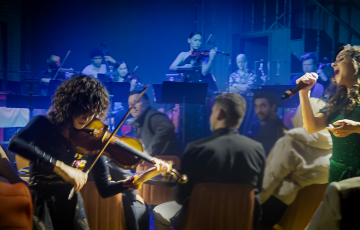 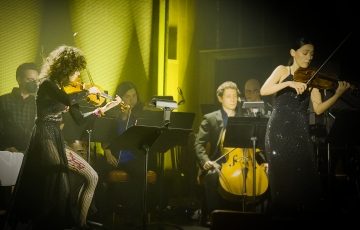 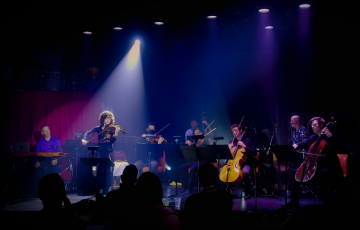 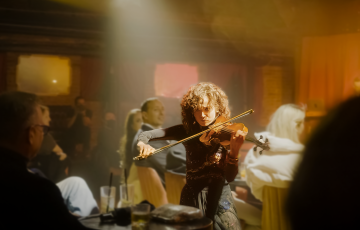 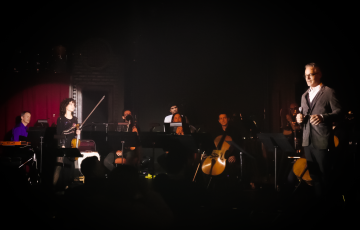 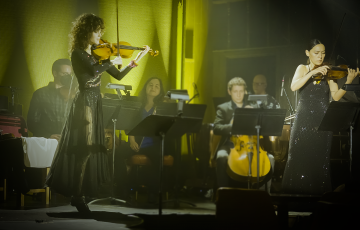 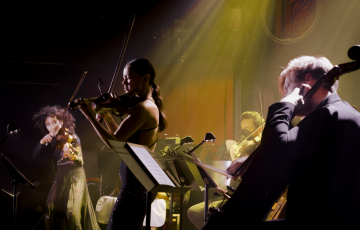 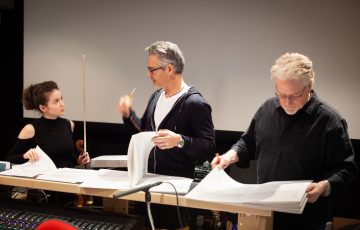 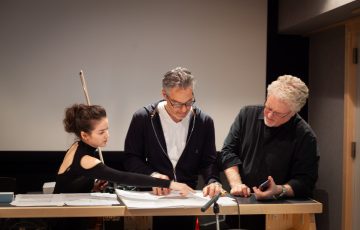