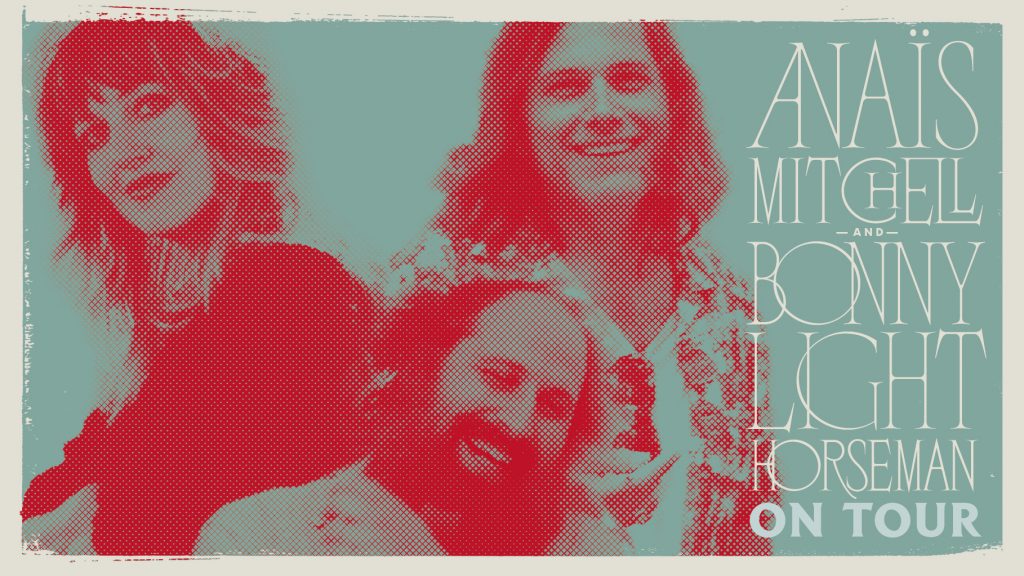 Anaïs Mitchell, the esteemed singer-songwriter whose Broadway smash "Hadestown" won 8 awards, including Best Musical, at the 2019 Tony Awards, is joined on this one-of-a-kind tour by Bonny Light Horseman, a folk supergroup trio comprised of Mitchell, Eric D. Johnson (best known for his project Fruit Bats and stints with The Shins), and Josh Kaufman (instrumentalist and producer known for his work with Hiss Golden Messenger, Bob Weir, The National). Bonny Light Horseman will perform selections from their two-time Grammy nominated album of traditional folk songs with a contemporary twist, before Anaïs takes to the stage to share songs from her forthcoming album as well as from her back catalogue of audience-favorites on this unique, collaborative tour.

ANAÏS MITCHELL is a Vermont and Brooklyn-based singer-songwriter, and the Tony and Grammy award-winning creator of the Broadway musical Hadestown for which she wrote the book, music and lyrics. Hadestown won 8 Tony Awards overall including Best Musical as well as the Grammy for Best Musical Theater Album. Mitchell was named to TIME’s prestigious TIME100 list in 2020, and her first book, ‘Working on a Song – The Lyrics of Hadestown’ was published by Penguin/Plume in the same year.

Dubbed by NPR as “one of the greatest songwriters of her generation,” Mitchell comes from the world of narrative folksong, poetry and balladry. Her recordings include the original studio album of Hadestown (2010, featuring Justin Vernon and Ani Difranco) and Young Man in America (2012), along with reinterpretations of traditional music including Child Ballads (2013, with Jefferson Hamer) and Bonny Light Horseman (2020, as Bonny Light Horseman, which received two Grammy nominations). She has headlined worldwide and supported tours for Bon Iver, Josh Ritter and Punch Brothers, and her music has featured in year-end best lists including NPR, Wall Street Journal, MOJO, Uncut, The Guardian, Sunday Times and The Observer. If there’s a common thread in Mitchell’s work it’s that she’s as interested in the world around her as the one inside her. As the New York Times wrote, “Ms. Mitchell’s songs address contemporary angst with uncanny vision….a formidable songwriting talent.”

The timeless qualities of traditional tunes can carry us across oceans and eons, linking us not only to the past but to each other as well. It was under the banner of those eternal connections that the trio of Bonny Light Horseman came together. From Wisconsin festival fields and a German art hub to a snowy upstate studio and everywhere in between, the astral folk outfit—comprised of Anaïs Mitchell, Eric D. Johnson, and Josh Kaufman—is mixing the ancient, mystical medium of transatlantic traditional folk music with a contemporary, collective brush. The resulting album, Bonny Light Horseman, is an elusive kind of sonic event: a bottled blend of lightning and synergy that will excite fans of multiple genres, eras, and ages.

Mitchell, the esteemed singer-songwriter whose Broadway smash Hadestown recently won “Best Musical” plus seven other trophies at the 2019 Tony Awards, met the indie rock stalwart Johnson a few years back through that thoroughly modern platform, Twitter. Best known for the Fruit Bats project he has helmed for two decades as well as for stints in The Shins and Califone, Johnson had been friends with producer and instrumentalist Kaufman (Craig Finn, Josh Ritter, The National, Bob Weir) for 10 years. Kaufman and Mitchell were already acquainted; together, the three made an unmistakable artistic connection, and had just begun experimenting when an invitation to perform at the 2018 Eaux Claires festival came from the fest’s co-founders, Justin Vernon and Aaron Dessner. Encouraged by the natural ease and intuitive bond they felt while sketching musical ideas in early sessions, the Eaux Claires play provided a target of sorts and they seized upon the opportunity to form the band in an official capacity.

“The conversation about starting the group and figuring out the type of music we’d play happened very quickly,” Kaufman says. “It’s like a love story: a really big fire, and the shared ideas of what we wanted the music to feel like. We wanted an openness and for it to feel emotional and personal.”

Each musician brought their own musical ideas to the rehearsals and the direction toward traditional songs from the British Isles emerged quickly. “I think it’s fair to say we are all inspired by traditional music in different ways,” Mitchell says. “We wanted to rework old songs but not in a ‘research project’ way. The emotions, the feeling of momentousness, the openness—even the chords being in open tuning—we wanted everything to be wide open. It was very healing to delve into these old stories and images that have existed for so long that you can rest in them.”

Following the success of the Wisconsin show, they were invited by Vernon and Dessner’s 37d03d (fka PEOPLE) collective to participate in a week-long artist residency in Berlin. Working at a venue called The Funkhaus, the trio recorded what would become the foundation of the full-length album, featuring fellow artists-in-residence Michael Lewis (bass, saxophone) and JT Bates (drums, percussion) as well as Vernon, Dessner, Kate Stables (of This Is The Kit), Lisa Hannigan, The Staves, Christian Lee Hutson, and more. Leaving Germany with roughly 60-percent of a record, the band reconvened at Dreamland Studios in Woodstock, NY, in January 2019 to finish, bringing Lewis and Bates as well as engineer Bella Blasko and mixer D. James Goodwin along with them.

“We kept saying how intuitive and natural this was, some kind of alchemy that worked,” Johnson says. “I trust these guys. We can make stuff and I’m not trying to control anything but my end. It’s very collaborative and we all have complementary skill sets, different ways of working that somehow totally click. We all know this material from slightly different pathways but we meet in the weird middle with most of it.”

From the first chords of the eponymous song “Bonny Light Horseman,” the band’s desire to create emotional intensity in open spaces is clear. Mitchell’s voice rises with a fevered energy over a mournful strum, and the song comes off as a lament that’s at once sad-eyed and hopeful. “Deep in Love” began as a Fruit Bats sketch, but after Kaufman recognized its uncanny (and unplanned) similarity to a certain traditional tune, the song took on new life at the hands of the band. Other numbers like “The Roving” and “Black Waterside” feature newly-written choruses sung in harmony—a fresh take on the typically chorus-less ancient ballad form. “Jane Jane” chimes along with a Johnson/Mitchell call-and-response refrain like some forgotten nursery rhyme; “Lowlands” sees Mitchell’s silvery verses cutting through the instrumental’s understated dynamics; and the record-closing duet “10,000 Miles” balances the sadness of leaving with the warmth of requited love.

Nowhere on Bonny Light Horseman does the music feel staid, or burdened from the too-tight fit of a stuffy Renaissance collar. This is colorful, textured work: a lush and loving ode to the past with one eye fixed on the present. Not once did the band feel burdened by the errand of a too-faithful homage, instead reveling in a sense of freedom to take leaps and liberties as they saw fit.

“The folk singer Martin Carthy once said, ‘You can’t break these songs that are hundreds if not thousands of years old; you’re not gonna hurt them by messing with them,’” Mitchell says. “The songs feel like ours, but they’re not ours. We worked on them and they feel like an authentic expression of us, but we’re also reenacting ritual.”

“This record is about timeless humanity,” Johnson says. “These 500-year-old lyrics are so deeply applicable. ‘The Roving’ could be the plot of an ’80s teen movie: ‘I had a wild summer with this awesome girl then she broke my heart!’ How incredible is it that as humans we still just want to love and have sex and feel sad and fight? It’s ancient music that feels, emotionally, right now. It’s thoroughly modern.”

The Making of "Bonny Light Horseman"

“...a wonderful evening...Bonny Light Horseman is a masterclass of a group with the way they play music...Song after song the night continued to build on one another. It was one you didn’t want to end.” - Road Trip Playlists Review of Webster Hall Concert (2/14/22)
“The whole night felt like one very special, unforgettable evening.” - Brooklyn Vegan Review of Webster Hall Concert (2/14/22)

“Anaïs Mitchell is one of the greatest songwriters of her generation.” - NPR
“The most engaging, and in some ways, most original artist working in the field of new American folk music.” - Independent on Sunday
“Mitchell is a skilled storyteller...and her delivery gives an emotional complexity that welcomes and even demands repeated listens.” - Pitchfork

TIME has named Anaïs Mitchell to their annual TIME100 list 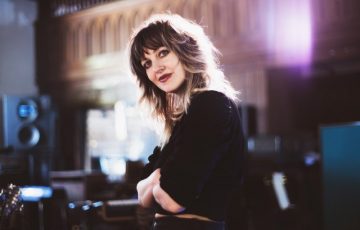 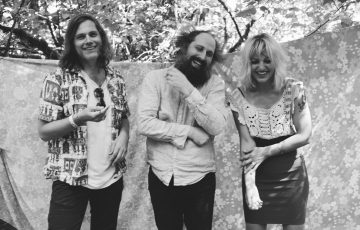 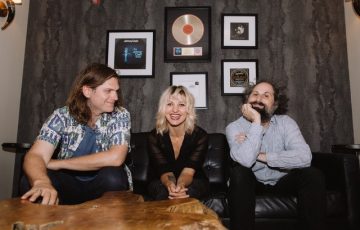 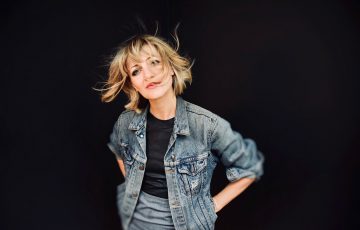 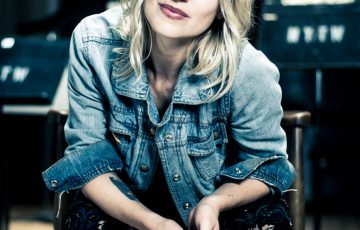 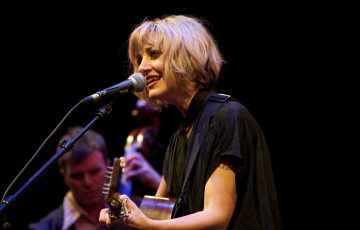